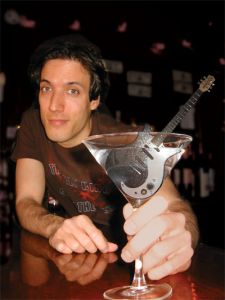 Rob Paravonian writes: "This morning I began my trek to Alaska, the first leg of which involves me getting to the Port Authority bus terminal to catch a bus to Newark airport. While waiting for the next bus a man walked up to me. Dressed in a polo shirt and khaki pants ... (and) wearing sunglasses indoors at nine in the morning."

"He got into my space and asked, 'I was wondering if you could help me.' This guy's probably going to ask for money, I thought, then immediately felt bad for making a snap judgment."

"[Then I realized that] he's definitely going to ask me for money. Now I was annoyed, mostly at myself because I gave him the benefit of the doubt and he let me down. I looked directly in his eyes, which made him uncomfortable. Nothing troubles a bullshit artist more than being confronted by his own soul."

"He went through his half-assed spiel ... He could tell I wasn't buying it ... He quickly turned around, grumbling, 'thank you, that's very white of you.'"

"... I said, 'there are three other people in here you could ask' ... he just walked up to the white boy with a backpack who looked the most gullible and the most like a tourist. I see your race card and I raise you a pair of you're-an-idiots."