This site is closed to new comments and posts.

Notice: This site uses cookies to function.
If you are not comfortable with cookies then please don't browse this website.
What is the history and present use of 920 Park Pl at NY Ave? — Brooklynian

What is the history and present use of 920 Park Pl at NY Ave?

I have always wondered what this big building was originally, and suspected it was once an orphanage. So today I looked it up, and am now sharing it with you.

Spoiler alert: It was institutional, but not an orphanage. 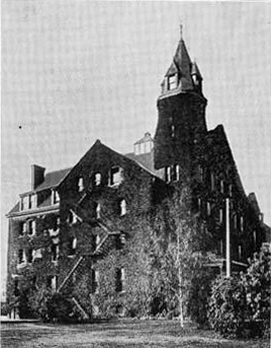 A. It was built as a home for indigent elderly people in 1889.

The Methodist Episcopal Home for the Aged was founded on May 10, 1883, by Methodist Church members to provide a comfortable residence for their "indigent" elderly. The first Home was situated on McDonough Street and Stuyvesant Avenue. As a result of the tireless efforts of some 200 women and men from virtually every Methodist Episcopal church in Brooklyn, the number of applicants for admission grew so large that expansion was essential. In 1889, a larger Home was built at 920 Park Place at the corner of New York Avenue. Around 1914, the facility was expanded to include Brown Memorial Chapel.

B. In 1976, it stopped being used for that purpose, because the entity constructed a modern nursing home, and moved its operations and residents there.

C. It now is presently partially occupied by a private, bilingual elementary school, which is religious in nature: 7th Day Adventist. Many of its students have a Haitian heritage. ...the "bilingual" is French and English.

According to a guy I talked to, most of the buildings in the complex are connected to each other. However, the school does not use most of the space because it is in a state of disrepair.

We are talking about half of a city block. To get an idea of its size, check out the aerial view: https://maps.google.com/maps?q=920+Park+Place,+brooklyn&hl=en&gbv=2&ie=UTF-8

It looks like you're new here. If you want to get involved, click one of these buttons!